BLOGPOST 1 – THE PRESIDENT’S MONTH AHEAD

Welcome to the first entry in my new blog, “The President’s Month Ahead.

It is proposed to have a two-track theme here. The primary purpose is to comment on the President’s general fortunes for the month ahead based on his Sidereal Lunar Returns. Occasionally, I expect to take a look at other methods in the rich repertoire of techniques established in the Western Sidereal Astrology school.

The second track is to have a running tutorial on how to calculate Return charts overall, and how generally to interpret them. This tutorial will necessarily be piecemeal, presented over time.

This blog is named after the monthly column that ran during the years of Presidents Johnson and Nixon, in American Astrology Magazine. Written under the name “I. Cowley,” that was a nom de plume of Cyril Fagan. The column ran until Fagan’s death. Eventually, something of the sort was re-instituted with editor Ken Irving’s “Eye on the Nation” column, though that used Sidereal Ingresses for mundane interpretations.

We are in luck this Presidential cycle because President-Elect Trump’s birth-time is reliably documented, as is that of the VP-Elect Mike Pence. Had Hillary Clinton been elected, this column would not be possible. No matter the personal assurance of any astrologer for this time or that, it has to be objectively admitted that, by the rules of assigning the Rodden Rating, all available birth-times for HCR must rationally be classified as “DD” (“Dirty Data”). This writer would not waste his time on a project like this without a birth certificate.

The first step in interpreting Sidereal Lunar Returns (SLRs) and Sidereal Solar Returns (SSRs) must involve a total change in the approach the astrologer takes to them. The Return charts are marvelously simple, almost bare-bones, yet powerful. You must be prepared to jettison almost every approach, technique and concept with which you’re familiar and stay within a very narrow focus. After all, the SLR lasts about 27.3 days, and the SSR for a year. A person could spend an entire lifetime exploring, developing and manifesting every little feature, every wide aspect, in his or her natal chart. There is just not time to do that in the time-span offered by Return charts. The proper way to look at Return charts will be explore in later blogs.

I am going to have to assume that every reader of this blog already has access to a major astrology program. This writer uses Solar Fire, but many other fine programs are available. Necessarily, when program settings must be described, they will be in terms of Solar Fire. I cannot answer questions about other programs.

So let’s start with the first steps and make sure you are set up correctly. From the Main Menu bar, select Preferences > Edit Settings. Click on the Zodiac tab. Under Default Zodiac select “Sidereal (Vedic).” In the drop-down box under “Ayanamsa for Sidereal Charts” select “Fagan-Allen.” Then click OK.

It’s very handy to edit the Tool Bar so that you can switch between Tropical and Sidereal Zodiacs. Just keep track of which zodiac you’re using at any time! Select Preferences > Edit Toolbar and on the left you will see “Available Toolbar Buttons.” Find “Zodiac” in the list and click the little “->” button to move it to the “Current Toolbar Buttons” column. While you’re at it, you may decide to add, delete and move other buttons as you find useful. Click “Save” and you’re done. Now you will see a button in your Toolbar that reads “Trop…Sid”; it is a simple toggle. The highlighted entry in your “Calculated Charts” list will simply switch back and forth between Tropical and Sidereal each time you click on this button.

President-Elect Trump was born June 14, 1946 at 10:54 AM, EDT in Queens, NY. Here we present his SLR that occurs on December 27, 2016, at 6:45 PM, EST, and is calculated for the White House in Washington, DC. It is customary to have the natal planets in the inner ring, and the Return planets in the outer ring. That makes sense because it represents the person (inside) surrounded by the environment (outside). The angles of the chart, that is the Sidereal Time and the resulting MC/AS, are that of the Return itself, not the natal angles.

As will elaborated on more thoroughly in the TUTORIAL sections in later blog posts, the most important areas to look at are the MC-IC and AS-Ds axes. In Trump’s SLR, the transiting Jupiter-Uranus opposition is closely aligned with Trump’s natal Jupiter across the meridian axis. This represents the good fortune and success against all expectations that has dogged Trump from the beginning of his candidacy. As of this writing, the attempts to prevent his placement as President continue with efforts to suborn Electors, and with a fake news conspiracy theory narrative that Russia hacked voting booths and that various independent web sites are Russian puppets. As of this writing, absolutely no proof of any of this has been presented to the public, and has been refused to a Congressional inquiry committee. On the basis of this SLR, which lasts through to the next SLR on January 24, 2017 this writer predicts that all efforts to delegitimize Trump’s legal accession to the Presidency will fail; the more so should he refuse to give in and continues to believe in himself. No matter how uncertain things seem now, Trump will be seen more and more favorably and his popularity will rise, during the period of this SLR. Donald Trump will be inaugurated and he will be the next President of the United States.

It’s also worth noticing that Trump’s Venus-Saturn conjunction is near the Ascendant and thus is in an angular zone. It will be useful to understand the natal planets, when made angular in a Return chart, as those parts of the personality being brought forward and emphasized. Venus-Saturn conjunctions generally mean a cold or hard heart, the ability to separate personal feelings from necessity. It can also mean that over time and with experience Trump has developed an appreciation for people who “get things done,” for practicality over ideology. We can expect Trump to exercise this part of his psychology virtually non-stop through the SLR period, still interviewing, sifting and selecting candidates for various posts. When he has the authority to do so, a lot of people in high government positions, those whose performance he considers sub-par, will hear Trump’s famous one-liner, “You’re fired!” 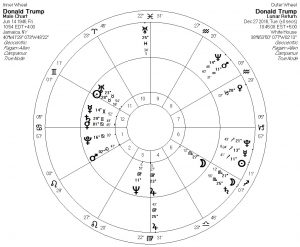